Stocks sold off and investors quit riskier assets on Friday after U.S. President Donald Trump said he and his wife had tested positive for the coronavirus and would isolate, four weeks before U.S. elections.

Investors sought safer assets such as gold, U.S. Treasuries and the Japanese yen.

U.S. stock futures fell and European shares opened lower, although they recovered some losses in early London trading after the initial overnight move. The STOXX 600 was down 0.3% .STOXX and London's FTSE 100 was down 0.7% .FTSE at 0930 GMT.

Shortly before 0500 GMT, Trump said on Twitter that he and his wife had been tested for coronavirus after Hope Hicks, a senior advisor who recently traveled with the president, tested positive.

He later tweeted he and the first lady had tested positive: “We will begin our quarantine and recovery process immediately,” he said.

Trump’s exposure could cause a new wave of market volatility as investors braced for the presidential election in November.

How long the risk-averse moves will last depends on the extent of the infection within the White House, said Francois Savary, chief investment officer at Swiss wealth manager Prime Partners.

“We may have to wait until the end of the weekend for more clarity on the situation,” he said. “The reaction has been a bit excessive with U.S. stock futures. It doesn’t mean the U.S. administration is not able to function.”

“It will weigh on the market today and early next week but will not induce a long-lasting correction if the infection is contained to Trump,” he added. 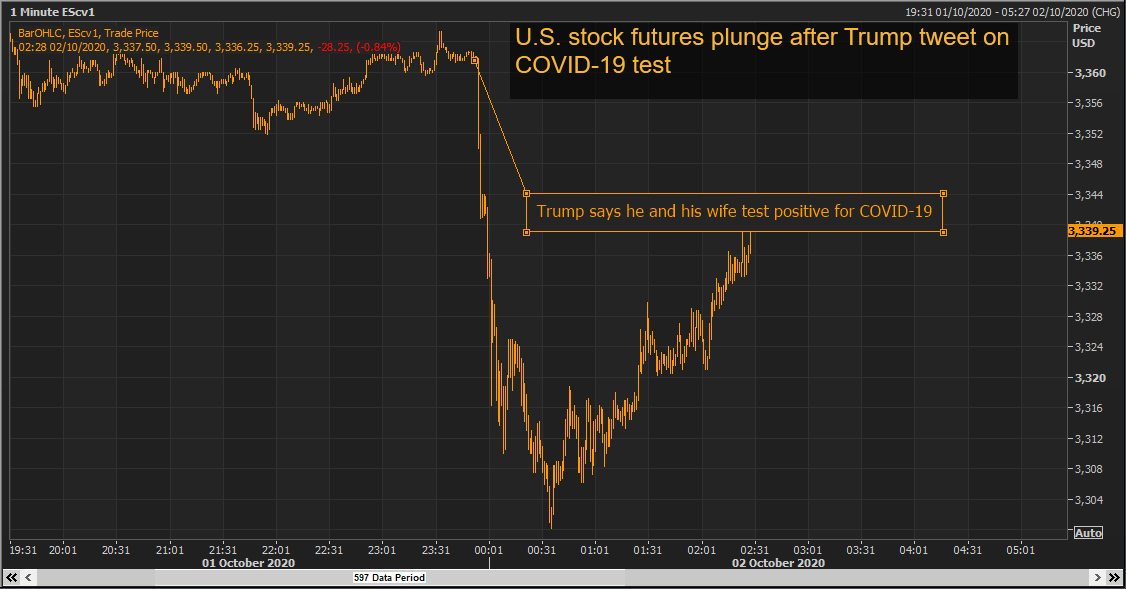 Immediately after the news, the U.S. dollar index rose and the safe-haven yen made its biggest jump in more than a month, reaching 104.95 at 0553 GMT JPY=EBS.

The Australian dollar, which serves as a liquid proxy for risk, was down 0.5% AUD=D3.

Oil fell, with Brent crude LCOc1 down 3.3% at $39.57 a barrel at 0935 GMT, having fallen overnight and stabilised somewhat as European markets opened.

“Depending on how this situation evolves over the weekend, notably if more members of the U.S. government’s senior leadership are diagnosed positive, gold could be set for an extended rally,” said Jeffrey Halley, a senior market analyst at OANDA.

After Trump said he had coronavirus, online gambling site Betfair suspended betting on the outcome of the U.S. election. Betfair’s odds had previously shown Democratic challenger Joe Biden’s probability of winning at 60% on Wednesday after the first U.S. presidential debate.

Even before news of Trump’s infection, markets had been more bearish after Washington failed to reach an agreement on a fiscal stimulus package to help the U.S. economy recover from the impact of coronavirus.

The last round of monthly U.S. unemployment data before the elections is due at 1230 GMT, although analysts say this has been relegated to secondary importance.