by Rate Captain
in Economics, Markets, News
Reading Time: 1 min read
A A
0
Share on FacebookShare on TwitterShare on WhatsappShare on Telegram 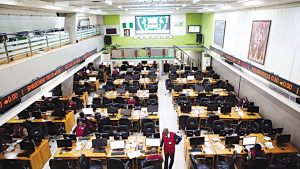 Russia reduces interest rate to 11% amid surge of the ruble

The market capitalisation of equities increased to N20.67tn on Thursday from N20.60tn the previous day.

Twenty-three firms saw gains on Thursday as against 17 losers.

Neimeth International Pharmaceuticals Plc and Nigerian Aviation Handling Company Plc emerged the biggest gainer as their share prices rose by 10.00 per cent to N1.87 and N2.97 per share respectively.

Nigerian Breweries Plc recorded the biggest loss as its share price decreased by 8.77 per cent to close at N52.00.

The Central Bank of Nigeria’s (CBN) Treasury Bills for a 1-year tenor worth N143.88 billion, which was auctioned on Wednesday,...

Russia reduces interest rate to 11% amid surge of the ruble

Russia’s central bank slashed interest rates to 11% for the third time in less than a month, boosted by lower...

Nine days ago, Terraform Labs founder Do Kwon shared a plan to revive the Terra Ecosystem after its stablecoin UST...

The Central Bank of Nigeria (CBN) has criteria to be met by Other Financial Institutions (OFIs) to qualify for enrollment...

No Result
View All Result